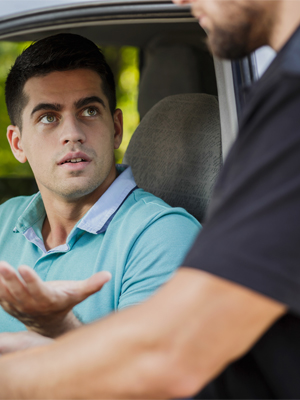 With the amount of time people spend on the road, we are all at risk of breaking a road rule at some stage or another.

It is important to understand that breaking road rules can have serious consequences for you and your family. Penalties for traffic offences can range from receiving a fine, incurring demerit points, a probation order, losing your licence, or even going to jail. The penalty will depend on the type of offence you have been charged with, the circumstances around the offending, and your traffic history.

You can be caught speeding by any of the following methods:

If you are caught speeding, you will usually be ordered to pay a fine and demerit points will be recorded on your traffic history. If you are caught driving at excessive speed and/ or a repeat offender, you may be at risk of losing your licence.

Drink and drug driving laws are enforced by:

The Police carry out breath and saliva tests and they can be either random or targeted.

If you return a positive drink or drug driving test the Police will suspend your licence for 24 hours and they can also confiscate or impound your car. If you’re caught drink driving, you will have to go to court. The Police will issue with a notice to appear in local Magistrates Court.

A magistrate will decide the length of your licence disqualification and whether you will be fined or sentenced to a term of imprisonment.

The severity of the penalty will depend on your:

Drink and drug driving offences are to be taken seriously, particularly when you have a high reading and/or have previously been convicted of a drink or drug driving charge.

If you are pleading guilty to any sort of charge of drink or drug driving, you will lose your licence. You may be able to apply for a work licence. There is no other special licence that you can get no matter how much you need a licence or how good your reasons are. The Court will only give you work licence to allow you to get to and from work.

Applying for a work licence:

We believe everyone has the right to be heard. We all have a story. Let us help you tell yours.